In 1969, two men were chosen as Most Valuable Players of the American Football League.  Both were quarterbacks, and oddly enough, they had individually been selected for the same honor in the previous two years as well.  Quarterbacks Daryle Lamonica (MVP - 1967) and Joe Namath (MVP - 1968) split the honor in 1969, the last season for the American Football League prior to the merger with the NFL. 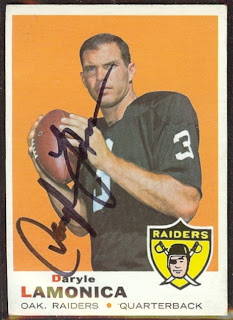 Daryle Lamonica had been on a blistering pace since coming to Oakland in a trade from the Buffalo Bills in 1967.  In his previous two seasons with the Raiders, the Mad Bomber averaged 3,237 passing yards and 27.5 touchdowns per year.  He eclipsed both marks in 1969, and led the league in passes (426), completions (221), passing yardage (3,302 yards) and touchdowns (34).  In the 1969 Inter-Divisional Playoff Game, Lamonica threw six touchdown passes in a 56-7 route of the Houston Oilers.  At the end of the season, Daryle Lamonica was selected as the AFL's Most Valuable Player by the United Press International and The Sporting News. 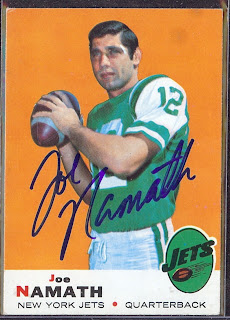 It would be difficult for anyone to eclipse the success that Joe Namath had in 1968.  Leading the Jets to the AFL's first Super Bowl victory was impossible to top.  But Namath did not rest on his laurels, or bask in fading glory.  Hobbling around on increasingly troublesome knees, Broadway Joe passed for 2,734 yards and 19 touchdowns in 1969.  Playing in all 14 games, Namath directed the Jets to a 10-4 regular-season record, but came up just shy in the Inter-Divisional Playoff, when New York fell to the Kansas City Chiefs by a score of 13-6.  Joe Namath was chosen as the AFL's Most Valuable Player by the Associated Press.